East Fork of the Dennison

This trip is from Fire Lake where you’d float the East Fork of the Dennison to the South Fork of the Fortymile River until it comes to the bridge with the Taylor Highway where we could have your vehicle positioned for you to drive back to Tok.  A super cub on floats is used to land at Fire Lake.  Each hunter is permitted 50# of gear and rifle or bow.  A load of 500# will be air dropped.  This runs $1500 per person and an additional $200 to have your vehicle moved.  Depending on the game available we may choose to only put one party on this river.  Success has been exceptional on this river.

Middle Fork of the Fortymile River

Using a Cessna 206 into Joseph gets you in walking distance of the river.  Your payload would be a maximum of 750# at a cost of $1565 per trip.  You would float out the Middle Fork to the North Fork of the Fortymile River, which would take you to the Taylor Highway where we could have your vehicle positioned for you to drive back to Tok.  It would cost an additional $250  to have your vehicle moved.  This river is considered one of the easier floats because the water levels don’t drop like other rivers. There is a ½ mile portage point on this river at the Kink.  Some parties will wait until they are past the Kink to begin hunting.  Three parties will be booked for this river, being put on the river one party per day.

Charlie River to the Yukon River

A bit more of challenge due to lower water levels by hunting season, this float goes into a strip called 3-Finger Charlie at the confluence of the river.  Most parties will want to float a few days before they begin hunting, in other words, DO NOT HUNT for the first 10 miles.  Water levels can drop fast so you really need to be aware to avoid having to drag your raft.  Staying very light is one of the keys to successfully hunting this river.  A section called the Rock Garden, just below the Galvin’s Strip, can pose some problems.  The NPS in Eagle likes to know all the parties we put on the river and like to know when you are off the river and your success.

You are allowed a payload of 750# for $1625 per trip.  Some parties will choose to position a vehicle in Circle City so they can drive back to Fairbanks and then come to Tok to pick up their other vehicle.  An additional trip from 3 Finger Charlie to Circle City to pick up the rest of the party runs an additional $1295  for a 750# payload.  If your party chooses for 40-Mile Air to pick you up at Circle City you’d be permitted a payload of 1000# for $1830  per trip to Tok.  Three parties will be booked for this river, being put on the river one party per day.

All float hunt parties are asked to check in at 40-Mile Air when they get off the river.  If we are not open, then leave a note on the door.  We like to know that all parties are off the river and their success. 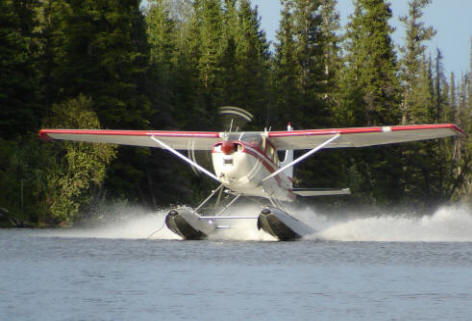 There are larger lakes that we can service with the 185 on floats. These lakes are located in GMU 12 and 20D and are priced out by the trip. Being a larger aircraft, the payload available is 700#, so normally two hunters and gear for a comfortable camp can be transported to and from the lake. Extra trips needed for bringing out your game would be additional. Prices range from $1300 to $1620 per trip. Success rate for ’05 season was 100% with a normal success rate between 53 – 80%. 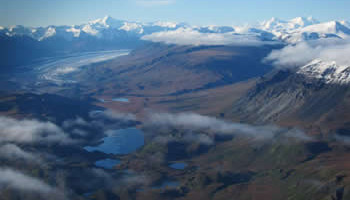